Emulous Bob of K Pride is the breed's first 100% Certified Meat Sire (CMS) and the world record-gaining bull in 1962 with an average daily gain of 4.29 pounds on a 140-day test, also earning the highest 205-day weight of 565 pounds in Murray Corbin's 1960 calf crop and the highest 365-day weight of 1,140 pounds at the Holdenville, Oklahoma Bull Test. 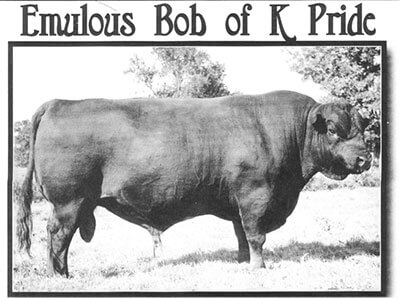 Emulous Bob of K Pride is the only 100% CMS sire of any breed to sire a 100% CMS sire who in turn sired a third generation 100% CMS sire. He has a total of nine sons, 17 grandsons and 17 great grandsons qualifying for the prestigious CMS honors.

In the 1960's and 1970's, the Emulous line became extremely dominant and many hardcore Emulous breeders believed that with this bloodline, the more intensely linebred they were, the better they were and the faster they would gain.

Emulous Bob of K Pride lived to be 14 years of age, leaving a huge impact on the breed through countless descendants in Angus herds around the globe.

Emulous Pride 70 is a 100% Certified Meat Sire (CMS) who has the distinction of being the only bull of angus breed in the world to both be sired by a 100% CMS sire and to himself sire a third generation 100% CMS sire. 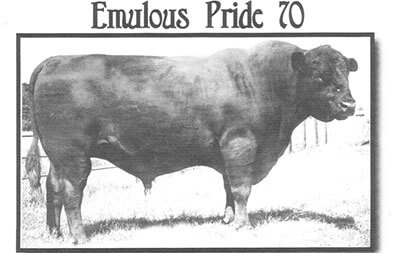 Emulous Pride 70, otherwise known as Big 70, is best remembered as the sire of Ankonian Dynamo, the 1970 International Grand Champion Bull of both the 1972 and 1973 National Western and went on to become one of the all-time most influential sires of breed history who is also featured amoung The 165 Most Influential Bulls of Angus History.

Emulous Pride 70 was bred by master breeder, Murray Corbin of Oklahoma, from the successful mating of Emulous Bob of K Pride to the highly regarded Gaines Lady. She is quite possibly the greatest Angus cow of her era who produced an impressive array of outstanding progeny in the Murray Corbin program.

Emulous Pride 70, together with his full brother, Emulous TN 70, were both dominant sires from the Emulous performance line that left an indelible mark of breed improvement and both rank amoung The 165 Most Influential Bulls of Angus History.

Emulous Pride 135 was a son of Emulous Bob of K Pride and was bred by Murray Corbin and later purchased by Leroy Baldwin, of Ocala, Florida and former American Angus Association Board President. A huge proponent of high quality beef, Mr. Baldwin started building his herd around a proven carcass sire long before the creation of the Certified Angus Beef (CAB) Program. Murray Corbin, Connerville, Okla., and Eugene Schear, Clayton, Ohio, tested the sire through Performance Registry International (PRI), putting 100 of his progeny on an official feed test. 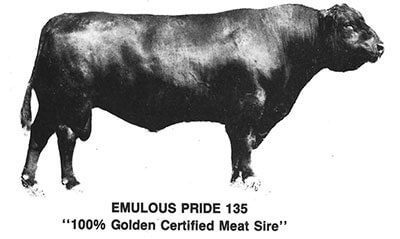 Harvested at an average fat thickness of 0.32 inch (in.), 97 of the 100 steers graded Choice or better, earning Emulous Pride 135 the distinction of being a 100% Golden Certified Meat Sire. Mr. Baldwin points out that the evaluation was done in 1972, four years before the USDA grading standards were lowered. Those 97 steers would have met the marbling requirement for the CAB brand today. "We've still got a little semen left on Emulous Pride 135.We've linebred that old bull for over 30 years," says Mr. Baldwin, who banked 4,500 ampules of semen on the bull before he died. "Everything on the place will go back to him two or three times on a four - or five-generation pedigree." The Baldwin cow herd will average about 1,200 pounds (lb.) in good flesh. Bull calves average 615 lb. at weaning and are developed to go to work under the harsh environment of the Florida range. In the past, that's meant supplementing them with 5 lb. of rolled oats a day to gain a pound a day in preparation to sell as 2-year-olds. "John [Crouch] kept telling me I ought to feed them better to get a 2-pound-a-day gain, and that it would give my marbling scores a chance to read like what they've really got," Mr. Baldwin says."I worked them up to 10 pounds apiece this year after we weaned them. We had a son of Emulous Pride 135 that had a marbling score of 8.88 with 3/10 of an inch of cover. That extra feed sure gave him a chance to show his marbling." American Angus Association

Ankonian Dynamo is one of the most dominant sires in breed history and the popular 1972 International Grand Champion Bull who was also Grand Champion of both the 1972 and 1973 National Western Stock Shows. He sired countless champions and sale-topping progeny throughout North Anerica in the 1970's and became a proven Pathfinder Sire with nearly 3,000 daughters enrolled in the AHIR program. 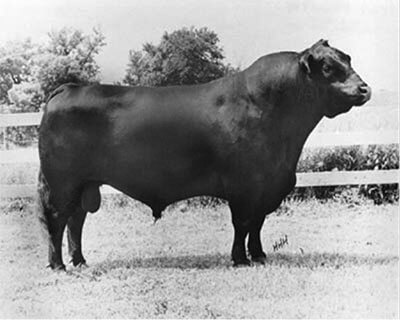 He was a baby bull calf at the side of his productive dam, Miss Emulous B, in 1970 when he was purchased by Ankony Angus as part of Murray Corbin's entire herd in Oklahoma. However, Ankony is recorded as the breeder and first owner.

He carried a strong Emulous tabulation, being sired by Emulous Pride 70 with his dam being a double granddaughter of Emulous 7000, making him a total outcross for many Angus breeders.

He was born unassisted at 90 pounds, weaned at 199 days with an actual weight of 705 pounds and had an adjusted 205-day weight of 726 pounds. He was tested with 21 other bulls for 160 days during a severe South Dakota winter and outperformed them all, weighing 1,269 pounds at 353 days with an adjusted 365-day weight of 1,302 pounds and a weight-per-day-of-age of 3.57, ranking him first in his contemporary group for every performance measure. Later, he recorded a mature weight of 2,400 pounds. 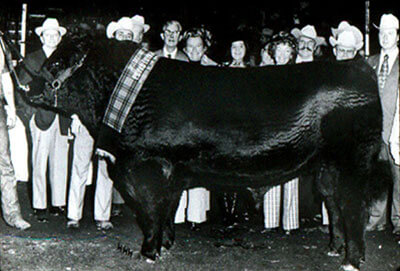 Ankonian Dynamo was the breed's number one sire of registrations in the consecutive fiscal years of 1976 and 1977. His most famous son, Sayre Patriot, achieved the same honor in 1980 and 1981. Both bulls are red gene carriers who are officially tested free of multiple defects monitored by the American Angus Association.

Sayre Patriot was born on Bicentennial Day, July 4, 1976. He features a sterling pedigree,being sired by Ankonian Dynamo from an outstanding daughter of Emulation 31 while descending from a grandam by Canadian Colossal. Sayre Patriot was born in the Sayre herd managed by Mark Richardson. Phil Tobridge discovered the bull as a calf while traveling with his new bride, Annie, on their honeymoon trip and consequestly, he quickly became a new sire acquisition for Gallagher's Farms owned by Jerome and Marlene Brody. He recorded a 205-day weight of 765 pounds, a 365-day weight of 1,220 pounds and a 365-day hip height of 52 1/2 inches. 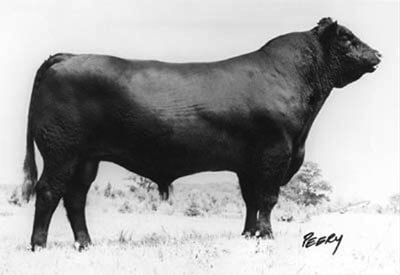 Sayre Patriot was a leading candidate to win the 1977 All-American, but was eliminated from the show after it was discovered that he had missed being tattooed. With fresh tattoos in his ears, he was selected as the 1977 Illinois State Fair Grand CChampion Bull the following week and went on to reign as the popular Grand Champion Bull of both the 1977 and 1978 North American International Shows and the 1978 National Western Stock Show where he was presented registration number 90000000.

Sayre Patriot is the the only bull in the breed history to sire three consecutive National Western Grand Champion Females. Sayre Patriots Lena in 1980. Kendalls First Lady in 1981 and Kruegers Scaara of Sayre of 1982.

Sayre Patriot is a proven Pathfinder Sire who was used with great successin many leading Angus herds throughout North America, recording more than 1,700 daughters in production in AHIR. Like his landmark sire, he was the breed's number one sire in registrations in two consecutive fiscal years and is a red gene carrier who was proven free of multiple defects monitored by the American Angus Association. 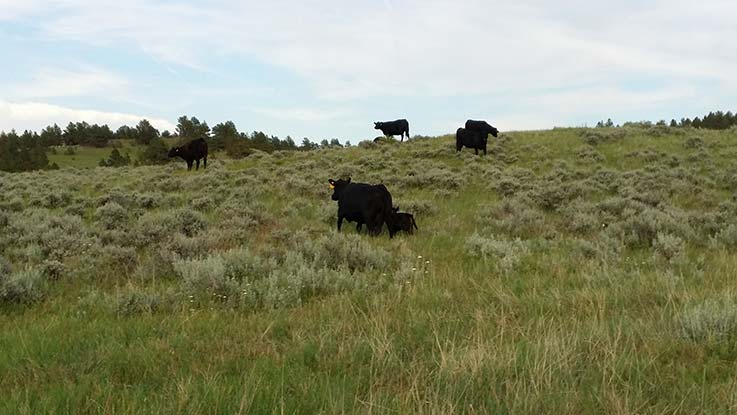